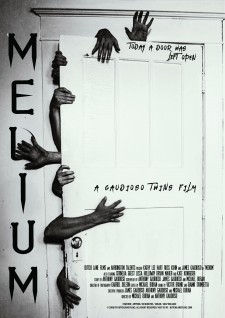 Samera Entertainment offers you an inside look at this suspenseful trip into the Great Beyond from Bounty Films.

MEDIUM tells the story of Jobe and William Caruthers  (James Gaudioso and Ross Kohn), two brothers who visit their clairvoyant Aunt Agnes, who suffers a debilitating heart attack during a reading, inadvertently leaving open the gateway between the living and the dead. With the assistance of a dime-store psychic, the brothers must close the gate before being possessed by the spirits beyond the threshold.

The film was inspired in part by the life of James and Anthony’s mother, Maryann, who is a well-known Clairvoyant in Hicksville, Long Island, and is also the number one cheerleader for their success. When the twins were growing up, their mother would leave her job at Luftansa Airlines, pick the boys up from Hicksville High School and beat the traffic to get them to auditions in the city, nearly a 2-hour commute for four years. After a few years of hits and misses, including being chosen over 2000 other children in the city to headline Spike Lee's famous FINISH LINE CAMPAIGN. James and Anthony decided to take matters into their own hands and produce their own films to showcase their craft. That's when the concept for MEDIUM began to form. James and Anthony co-wrote a screenplay with Michael Buran (who also directs and co-stars) and pre-production was underway.

MEDIUM was a micro-budgeted endeavor, shot to the tune of $10K in Long Island, New York in the winter of 2004. The film, which also starred famed débutante Cornelia Guest caught the attention of the editors of Vanity Fair, who named James and Anthony among the TOP 25 to watch in an indie film in their annual Rising Star spread.

Since MEDIUM, the Gaudioso brothers have gone on to create many other films featuring them as co-stars, each with escalating budgets, including the 2017 psychological mystery, The Ghost and the Whale, starring Jonathan Pryce and the 2019 neo-noir crime drama Duke. Sharry Flaherty of Samera Entertainment helped acquisition MEDIUM, for Bounty Films, who distributed the film, and it is now available to stream for free via an Amazon Prime membership.