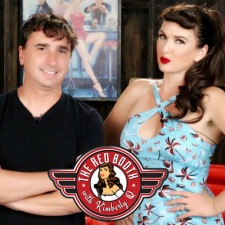 LOS ANGELES, August 9, 2018 (Newswire.com) - The "Sharknado" series has been ruling the airwaves on SyFy for the last five years. And Anthony C. Ferrante has been the man behind the camera for every single film in the franchise, directing big names like Ian Ziering, Tara Reid, David Hasselhoff, and Vivica A. Fox to name a few. Ferrante sits in THE RED BOOTH this weekend with pinup style hostess Kimberly Q. "THE RED BOOTH" is a nationally broadcast talk show that airs every Saturday night on Youtoo America, and can be streamed on Apple TV, Roku, Amazon Prime, and YouTube.

Anthony C. Ferrante carved himself a nice niche for himself as the director of obscure cult horror classics like 2005's "BOO," and 2007's "HEADLESS HORSEMAN." He worked on smaller projects thereafter until he landed a gig behind the camera for 2013's "HANSEL & GRETEL," which subsequently landed him as the director on "Sharknado" that same year. The unabashedly absurd concept of a tornado made up of sharks that terrorize a beachfront city captured the imagination of the internet, making it a bonafide phenomenon, reigniting the careers of stars Ian Ziering and Tara Reid, spawning five sequels, and growing the rabid fascination of fans from all over the world.

Ferrante sits with Kimberly Q this weekend to discuss the sixth (and final?) film in the Sharknado saga, "THE LAST SHARKNADO: IT'S ABOUT TIME" which premieres on SyFy on Sunday, August 19. It's set to be a wild ride that's sure to please fans of both shark movies and (thanks to a time travel twist) dinosaur movies. So be sure to watch and close out the summer movie season right.

About "THE RED BOOTH":

"THE RED BOOTH" is created and produced by pinup style host Kimberly Quigley. She interviews entertainment industry professionals such as actors, directors, singers, musicians and more. Its tag-line, Diner Booth Diaries can be found across social media with nearly 200 episodes to its credit. With its Vintage Americana flair, it's a fun look into the history of many well-known stars of today and tomorrow.