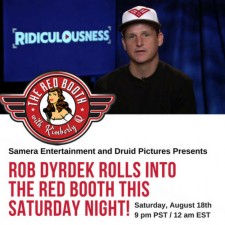 Samera Entertainment and Druid Pictures are excited to present skate legend Rob Dyrdek on THE RED BOOTH with Kimberly Q.

LOS ANGELES, August 16, 2018 (Newswire.com) - Rob Dyrdek has taken the world by storm as a record-setting skateboarder, entrepreneur, and television personality. His viral video show RIDICULOUSNESS has hit the MTV airwaves for a fresh season with guests like Steve-O from Jackass, Cody Garbrandt of the UFC, and Olympic medalists such as Adam Rippon and Chloe Kim. This Saturday night, Dyrdek takes some time to talk in THE RED BOOTH with pinup style hostess Kimberly Q. THE RED BOOTH is a nationally broadcast talk show that airs every Saturday night on Youtoo America and can be streamed on Apple TV, Roku, Amazon Prime, and YouTube.

After retiring from a record-breaking career as a professional skateboarder, Rob Dyrdek became a mainstay on MTV with shows like ROB & BIG, ROB DYRDEK'S FANTASY FACTORY, and RIDICULOUSNESS, which is still going strong after debuting in 2011.

On top of being a massive television presence, Rob Dyrdek is also a savvy businessman who went from a professional athlete at age 16, to becoming a do-or-die entrepreneur that's always looking for innovative ways to market his brand. His venture studio, THE DYRDEK MACHINE has helped build, invest, and advise a multitude of companies, and Dyrdek's association with those companies has continued to help smaller businesses attain the growth they need to last for the long haul.

Rob Dyrdek sits with Kimberly Q this weekend to discuss the eleventh season of RIDICULOUSNESS on MTV where Dyrdek joins co-hosts Sterling "Steelo" Brim and Chanel West Coast to commentate on the most ridiculous videos on the internet with special celebrity guests.

THE RED BOOTH is created and produced by pinup style host Kimberly Quigley. She interviews entertainment industry professionals such as actors, directors, singers, musicians and more. Its tag-line, Diner Booth Diaries can be found across social media with nearly 200 episodes to its credit. With its Vintage Americana flair, it's a fun look into the history of many well-known stars of today and tomorrow.