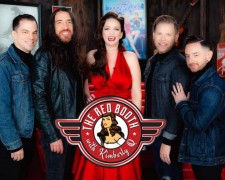 LOS ANGELES, March 7, 2019 (Newswire.com) - LA-based rockers Rival Tides sit with pinup style hostess Kimberly Q to talk about their upcoming full-length album (releasing March 15th) and give a live performance in the studio. All this and more this Saturday night on THE RED BOOTH.

Rival Tides assembled in 2012 with members Robyn August, Spencer Kent, Jason Friday, and Greg Fulleman. They put together their self-titled EP in 2013. The group followed it up with their second EP "New Rituals" in 2015. Both EPs were produced by Erik Ron who has worked with Godsmack and New Year's Day in the past. Those releases helped build the reputation of Rival Tides in the music world.

Over the last year, Rival Tides has recaptured their true passion for making music and have recorded their first full-length album. So be on the lookout when the album drops March 15th.

Don't miss the interview with Rival Tides on THE RED BOOTH with Kimberly Q this Saturday, March 9th at 9 p.m. PST / 12 EST on Youtoo America, the national cable network broadcasting across the US to 417 cities and counting.

THE RED BOOTH is a nationally broadcast talk show that airs every Saturday night on Youtoo America via Charter, Time Warner Cable, Comcast, NKTELCO and more. The show can also be streamed via Apple TV, Roku, Amazon Prime, SkyStream, and YouTube. Created and produced by pinup style host Kimberly Quigley. She interviews entertainment industry professionals such as actors, directors, singers, musicians and more. With over 200 episodes to its credit and a fun Vintage Americana flair, it's a peek into the stories of many well-known and up and coming talents in Film, TV, Music and more