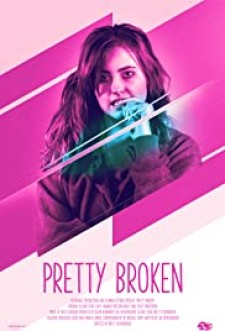 Samera Entertainment goes behind the scenes of this insightful dramedy from husband & wife directing team, Brett Eichenberger and Jill Remensnyder.

LOS ANGELES, October 20, 2020 (Newswire.com) - PRETTY BROKEN stars Indie Series Award Winner Jillian Clare as Lindsey Lou, a young woman who is on the verge of divorce when she receives news that her father has gone missing as the result of a climbing accident and presumed dead. Lindsey Lou does her best to keep her father's memory alive, but her mother (Stacy Edwards) is ready to leave the past behind by replacing him with a younger man named Jerry (Daytime Emmy Winner Tyler Christopher of Days of Our Lives). Tension abounds as an odd love triangle forms and the stages of grief present themselves in a disorganized fashion.

Brett Eichenberger says, "Pretty Broken reminds us that family is defined by the people in our lives that we love, no matter how they're related. Family transcends time and place, and defines who we are."

PRETTY BROKEN is the third feature film directed by Brett Eichenberger. It was produced by Eichenberger and Jill Remensnyder through their company Resonance Productions and Leonian Pictures, a company owned by producer Susan Bernhardt.

Jill Remensnyder says, "I've always been fascinated by what goes on behind closed doors of seemingly normal families and how people process grief. Pretty Broken allows us to join Lindsey on her journey to heal and discover who she is and what she's capable of."

The film had its world premiere at the 2018 Newport Beach Film Festival. It was also screened at The Portland Film Festival to great acclaim. PRETTY BROKEN is now on VOD in the U.K. It is distributed by Bounty Films and is now streaming on Amazon Prime free to its members.

Resonance Productions is an award-winning production company that serves a wide range of clientèle. Resonance is currently in production on a feature-length documentary about Bigfoot and developing additional projects for 2021 and beyond.