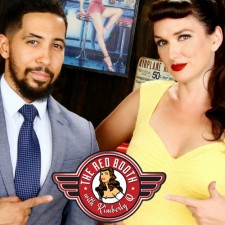 LOS ANGELES, July 12, 2018 (Newswire.com) - Be sure to set your reminders this weekend because on July 14, Neil Brown Jr. one of the stars of CBS’s hit drama “SEAL Team,” pays a visit to THE RED BOOTH with pinup style hostess Kimberly Q. THE RED BOOTH is a nationally broadcast talk show that airs every Saturday night on Youtoo America and can also be streamed on Apple TV, Roku, Amazon Prime, and YouTube.

Neil Brown Jr. has been bringing his talents to both the big and small screen since his teens. Over the years, Neil’s landed multiple film and television roles which helped him develop his craft and showcase his physicality. With over two decades in the business, Neil Brown Jr. has really hit his stride over the last three years, by playing real-life hip-hop artist DJ Yella in the critically acclaimed smash “Straight Outta Compton.” He also snagged recurring roles on the cult favorite series “Dirk Gently’s Holistic Detective Agency” and on HBO’s topical comedy-drama “Insecure.”

Neil Brown Jr. sits with Kimberly Q this weekend to talk about his starring role alongside David Boreanaz in CBS’s hot new military drama “SEAL Team” which has been renewed for a second season set to premiere this October.

Hear about all this and more on THE RED BOOTH this Saturday, July 14 at 9 p.m. PST / 12 EST on YouToo America, the national cable network broadcast to 45 million households a week.

THE RED BOOTH is created and produced by pinup style host Kimberly Quigley. She interviews entertainment industry professionals such as actors, directors, singers, musicians and more. Its tag-line, Diner Booth Diaries can be found across social media with nearly 200 episodes to its credit. With its Vintage Americana flair, it’s a fun look into the history of many well-known stars of today and tomorrow.