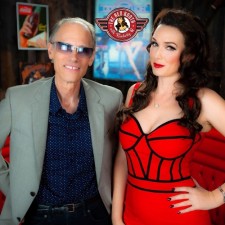 LOS ANGELES, January 3, 2019 (Newswire.com) - Guy Hoffman recounts his storied career in the music industry and lets everyone in on his plans for the future this weekend on THE RED BOOTH with pinup-style hostess Kimberly Q.

Hoffman has a history that dates back over 35 years. He was one of the founders of Milwaukee punk bands The Haskels and Oil Tasters. In 1984, he joined as the drummer for BoDeans and featured on their 1986 hit debut album "Love & Hope & Sex & Dreams," which was produced by T-Bone Burnett.

In 1993, Hoffman became the drummer for the Violent Femmes and toured with the band at such events as Woodstock '94 and VH-1's Hard Rock Live. He also featured in two new recordings of Femmes' signature song "Blister In The Sun" for the 1997 cult classic "Grosse Pointe Blank."

In 2006, Hoffman collaborated with Basil Holly of Whipsmack! to form Radio Romeo on both drums and vocals. Their self-titled album was released in 2007 and has a sound reminiscent of hard rock from the late 1980s mixed with delta blues riffs.

So set the clocks for Guy Hoffman's interview with Kimberly Q on THE RED BOOTH this Saturday, Jan. 5, at 9 p.m. PST/12 EST on Youtoo America, the national cable network broadcasting across the U.S. to 417 cities and counting.

THE RED BOOTH is a nationally broadcast talk show that airs every Saturday night on Youtoo America via Charter, Time Warner Cable, Comcast, NKTELCO and more. The show, which can also be streamed via Apple TV, Roku, Amazon Prime, SkyStream and YouTube, was created and produced by pinup-style host Kimberly Quigley. She interviews entertainment industry professionals such as actors, directors, singers, musicians and more. With over 200 episodes to its credit and a fun Vintage Americana flair, it's a peek into the stories of many well-known and up-and-coming talents in film, TV, music and more.