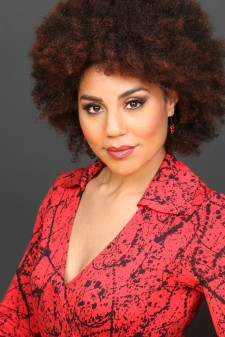 The skintight dress is made entirely out of hot pink latex and created by Desi Allinger of Desi Designs Couture (desidesigns.com). Allinger is the designer of Villa’s now infamous 2019 Grammy’s Wall Dress.

Villa debuted her first EP “I Make the Static” in 2017, which hit #1 on the Billboard Rock and Alternative Charts and #12 on the Billboard Hot 200 Charts. The album went on to hit #1 on both iTunes and Amazon Music after she came out as a pro-Trump Conservative.

Villa made headlines last year at the 2018 Grammys, when she painted her purse with her pro-life mantra, “Choose Life,” and wore a hand-painted wedding gown featuring a sonogram of her daughter. At 20 years old, Villa chose to put her daughter up for adoption over abortion after leaving a violent and abusive relationship.

After the vocalist shared her experience on the Fox Business show “Mornings with Maria,” major outlets, including Variety, MTV and People Magazine, picked up her story. “I have chosen to platform to encourage women to think for themselves and gather all the information before making their own decision. Having life-giving options like adoption can empower women to do what they feel is right,” she said while on the show. “There are thousands of women in similar situations to mine. Many are far younger – and more vulnerable than I was. I’m not here to condemn them, or call them names, or try to make them feel worse than they already do.”

She has since come out even stronger on the pro-life front, marching at DC’s 2019 “March for Life”, singing at the Susan B Anthony gala, and sharing her ‘adoption over abortion’ story as keynote speaker for Ralph Reed’s 2018 “Faith and Freedom: Road to Majority” event, which she will again speak at on June 2019.

She notably campaigned for the “Heartbeat Bill” and has voiced her public support for pro-life candidates in public office.

“Adoption was the answer for me. Yes, it was scary—this real-life situation is scary. Facing the unknown is scary, but what is the alternative? Murder. That is what abortion is,” she told LifeSiteNews.com.

“I ultimately chose open adoption, and am so grateful that I did. I am very much a part of my daughter’s life,” she added.

Villa also told the site that women facing a crisis pregnancy should not be “pressured into a life of regret, being the cause of death to your child.”

Her latest posts attacking Planned Parenthood have garnered thousands of likes, but numerous hate and death threats as well.

She first met Abby Johnson after months of online friendship at the annual ball for the pro-life charity “Save The Storks”, which took place at Trump Hotel and featured Vice President Pence as a speaker.

Villa then attended CPAC, where she was awed after watching a screening of “Unplanned”.

“We just clicked instantly. Her work on the pro-life front is absolutely legendary. This film will heal and educate millions. It is a must-see, no matter what your stance on abortion is.”

Villa has been a vocal advocate for life and recently collaborated with Save The Storks, a charity in her and her husband financially support, and released a short documentary asking New Yorkers what they thought about the new law allowing 9-month abortions, but with the twist of saying “puppies” instead of babies. The short premiered at Michael Cernovich’s and CULTTTURE’s “A Night for Freedom” event during CPAC in DC to an enthusiastic audience of hundreds.

Villa is not stopping, and plans on using her platform to keep creating awareness and compassion, never judgment around adoption, abortion and the protection of both mothers and babies.

“You will survive this. You will make it through. And you absolutely, 100 percent, deserve all the happiness and love in the world. You’re so much stronger than you know.

"You deserve a second chance at life… and your baby deserves a first chance.”