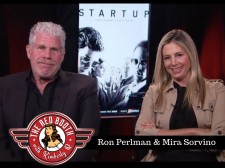 STARTUP is a tech-savvy thriller about the corruption of an online buying and selling platform that makes way for a next level "Dark Web." Perlman gets sassy with our host as they discuss his billionaire character and Mira opens up about her role as an NSA agent and they both chime in on “how far should the government go.” The series also stars Adam Brody, Edi Gathegi, and Otmara Marrero, and can be streamed right now for free on Crackle: A Sony Network.

Mark your calendars for Ron Perlman and Mira Sorvino's interview on THE RED BOOTH this Saturday, Nov. 24 at 9 p.m. PST / 12 EST on Youtoo America, the national cable network broadcasting across the US to 417 cities and counting.

THE RED BOOTH is a nationally broadcast talk show that airs every Saturday night on Youtoo America via Charter, Time Warner Cable, Comcast, NKTELCO and more. The show can also be streamed via Apple TV, Roku, Amazon Prime, SkyStream, and YouTube. Created and produced by pinup style host Kimberly Quigley, she interviews entertainment industry professionals such as actors, directors, singers, musicians and more. With over 200 episodes to its credit and a fun Vintage Americana flair, it's a peek into the stories of many well-known and up and coming talents in film, TV, music and more.