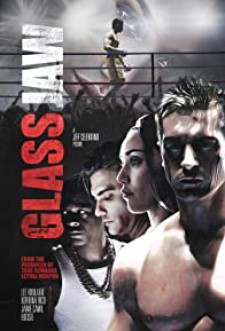 Samera Entertainment gives the inside scoop on this gritty boxing drama. Now available on VOD, Amazon Prime and Urbanflix.

LOS ANGELES, April 2, 2020 (Newswire.com) - GLASS JAW stars Lee Kholafai as Travis Austin, a rough and tumble kid who goes from being a ward of the state to becoming a championship boxer. He wins the big title and gets the girl, but that's only the beginning.

After a post-fight party takes a dark turn, a teenage girl is dead and Travis is locked up in connection with her accidental overdose. Inside, Travis must exercise his primal survival instincts and defend himself against fellow inmates. A few years later, Travis is released and must adjust to life on the outside. Travis starts again from the bottom up, and trains to reclaim his dignity and his title.

Two other standouts in the GLASS JAW ensemble are John Gries (Napoleon Dynamite) and Mark Rolston (Aliens). Gries is the tortured center of the film as Travis Austin's gambling alcoholic of a father, and Rolston is the redemptive heart of the piece as the grizzled trainer who takes Travis under his wing after Travis is released from the pen.

Sharry Flaherty of Samera Entertainment acquisitioned GLASS JAW for Vision Films, which acquired the picture for distribution and released it into theaters on Oct. 26, 2018, the same date of its VOD premiere. It was soon followed by a DVD release in December. It is now available for rent.