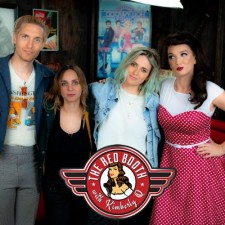 LOS ANGELES, January 17, 2019 (Newswire.com) - ​​Dead Sara gathers in THE RED BOOTH to talk about touring, headlining, and how it all started. Plus the special re-release of their self-titled debut album. They also perform two songs live on set this Saturday night!

Dead Sara has worked steadily over the last decade, touring with such legendary acts as Chevelle, The Used, The Offspring, Neon Trees, and Muse. They've made appearances on Jimmy Kimmel Live, The Vampire Diaries, and Late Night with Seth Meyers.

Emily Armstrong and Siouxsie Melody joined forces when they were teens as guitarists and singer-songwriters. Their debut EP "The Airport Sessions" was released in 2008. Their lineup became more solidified in 2009 when Sean Friday joined the band as the drummer. In 2010 Dead Sara began their own label, Pocket Kid Records, through which they released their eponymous full-length debut album in 2012 with producer Noah Shain. Their breakthrough single "Weatherman" was featured as the top song on Loudwire's "10 Best Rock Songs of 2012" ranked above tracks by Three Days Grace, Stone Sour, and Deftones. Their second album "Pleasure To Meet You" dropped in 2015 and kept up the momentum of their rising star. Most recently, Dead Sara released their six-track EP "Temporary Things Taking Up Space" in June of 2018. Their single "Anybody" was ranked on Billboard's list of "Top 25 Rock Songs of 2018 signifying a bright future for this female-led hard rock powerhouse!

Don't miss Kimberly Q's interview with Dead Sara on THE RED BOOTH this Saturday, Jan. 19 at 9 p.m. PST / 12 EST on Youtoo America, the national cable network broadcasting across the U.S. to 417 cities and counting.

THE RED BOOTH is a nationally broadcast talk show that airs every Saturday night on Youtoo America via Charter, Time Warner Cable, Comcast, NKTELCO and more. The show can also be streamed via Apple TV, Roku, Amazon Prime, SkyStream, and YouTube. Created and produced by pinup style host Kimberly Quigley. She interviews entertainment industry professionals such as actors, directors, singers, musicians and more. With over 200 episodes to its credit and a fun Vintage Americana flair, it's a peek into the stories of many well-known and up and coming talents in Film, TV, Music and more.